We’ve heard rumors about an Equestria Girls brand in the pipeline for some time now, but only now has an official statement been made. The New York Times got the scoop along with the trailer above. It looks like Equestria Girls will, in fact, be a movie that will have a limited release around the country. An eventual debut on The Hub is already assured. The movie will feature the Mane 6 ponies traveling to another realm/dimension where they take on human teenager forms and attend high school.

Plenty of merchandise and licensing deals have been made to support the movie including “toys, apparel, publishing and accessories. Multimedia components include an interactive Web site, content on YouTube and a partnership with Stardoll.com, a fashion Web site for girls” according to John A. Frascotti, Hasbro’s chief marketing officer. Megan MCarthy, head writer for MLP:FiM, is also the head writer for this feature. Not only that, but the voice actors are all back and the animation style is being kept as similar as possible to Friendship is Magic. 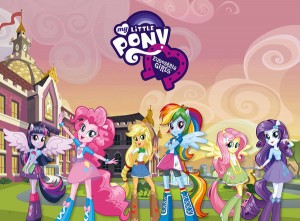