My Little Pony: Friendship is Magic Season 2 coming to DVD 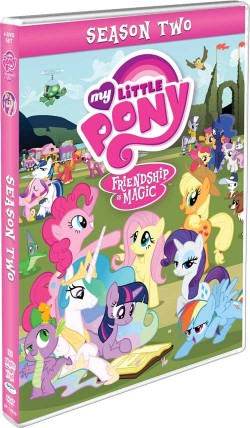 A press release has been sent out announcing Season Two of My Little Pony: Friendship is Magic will be coming to DVD on May 14th. Sold exclusively through Amazon.com, the set will contain all 26 episodes. Retail price appears to be US$34.99. Bonus features are said to include, but is not limited to, sing-alongs and printable coloring sheets.

You can see the press release after the jump!

AVAILABLE MAY 14
EXCLUSIVELY AT AMAZON.COM

Includes All 26 Episodes of the Second Season!

The studious Twilight Sparkle may have learned the true meaning and value of friendship through the amazing bonds she’s formed with every pony in Ponyville, but the lessons keep on coming! Join Twilight Sparkle and her friends – Rainbow Dash, Fluttershy, Apple Jack, Pinkie Pie, Rarity and little Spike – as they embark on one crazy adventure after another, leading to the greatest wedding Equestria’s ever seen. And you’re invited!

The My Little Pony: Friendship is Magic series is currently airing on The HUB TV Network.

About Hasbro Studios:
Hasbro Studios is the Los Angeles-based production division of Hasbro, Inc. (NASDAQ: HAS). The studio develops and produces shows based on Hasbro’s world class brands, including TRANSFORMERS, MY LITTLE PONY, LITTLEST PET SHOP and SCRABBLE. Many of these shows air on The Hub, a television network for kids and their families. Studio programming can also be seen in more than 170 countries globally. The Hub is a joint venture between Hasbro and Discovery Communications (NASDAQ: DISCA, DISCB, DISCK).