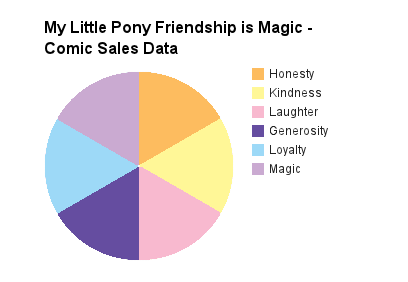 ICv2 has released comic sales data for the top 300 comics released in February 2013.

My Little Pony: Friendship is Magic issue #3 was pushed back from January to February due to shipping delays just before the new year. This means that there was technically no new comics in January for MLP. This will make a slight anomaly in some of the graphs so its important to make that footnote now. 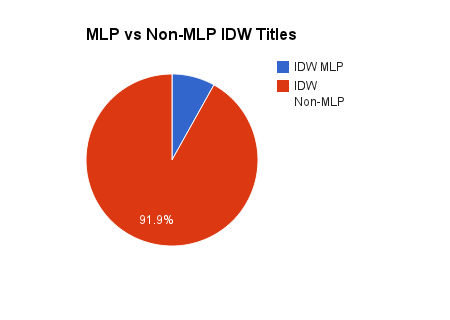 Of the 37 IDW books on sale in February, 3 books were My Little Pony related. That accounts for 8.1% of IDW’s offerings for the month.

Looking at the actual sales volume of the MLP vs Non-MLP related books tells a slightly different story. Despite only being about 8% of IDW’s offerings, My Little Pony accounted for more than 27% of total issues sold. 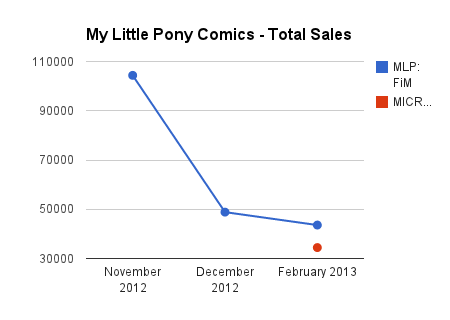 You can see the sharp and expected drop off from issue 1 to issue 2. This was exaggerated because of the number of variant covers for the first issue as well. Issue 2 to 3, though, is fairly stable. The Micro-Series had a strong start, though, not as strong as the level the main on-going series is settling around.

Most of the titles on this chart are also distributed to Europe by Diamond UK, which can account for significant sales for the publisher, ranging from 3-20% of the U.S. numbers. Sales by Diamond UK are not included in the numbers above.
One other factor to consider is that sales through Diamond and other comic distributors are non-returnable to retailers. That means that there is a considerable unknown percentage of books unsold at the retailer level, probably amounting to 5-20% of sales.

This entry was posted in Comics, My Little Pony and tagged Comic Book Sales Data. Bookmark the permalink.