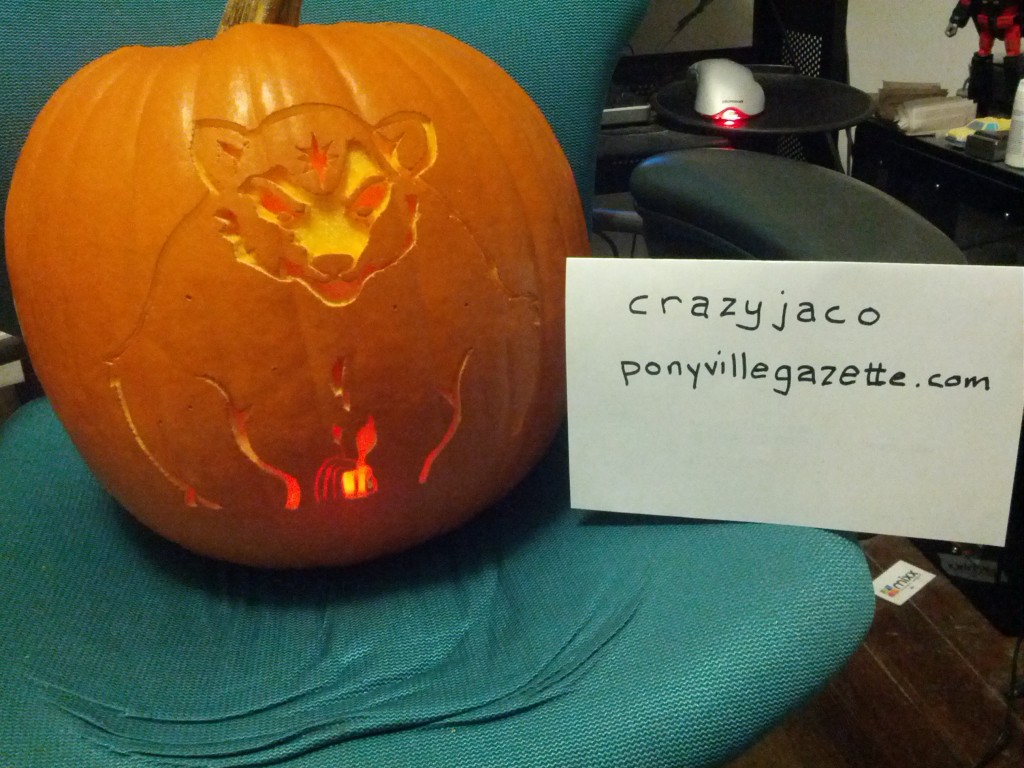 Followers of the blog may remember I did a pretty fun pumpkin carving of Twilight Sparkle last year. One year later, I had the daunting task to figure out a follow up to that fantastic piece. While doing a Google Search of The Great and Powerful Trixie, I happened upon a fantastic small image of Twilight Sparkle confronting the Ursa Minor from the Season 1 episode Boast Busters. 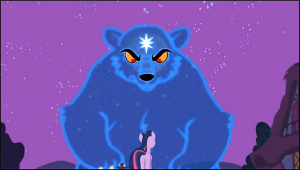 The image was pretty small and I could not find a larger one, but it was just too good to pass up. I ended up finding a color copier and enlarging the image by over 250%. This gave me a nice long landscape image. I wrote over the lines I wanted to draw on the pumpkin with a pen. I then taped this as my stencil on to the side of my freshly cleaned out pumpkin. 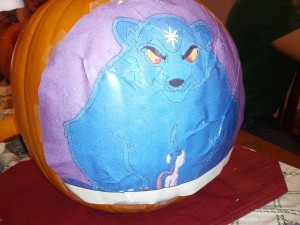 As you can tell in the previous photo, the next step is to poke tiny holes along the lines you want to cut. This is a maddening and hand cramping process. After what felt like hours, my pumpkin was ready to be cut. 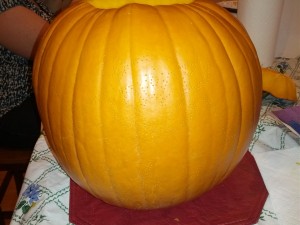 Two days later and lots of cut fingers and slimy hands, my pumpkin was starting to finally look close to done. The lines were a grueling activity, but no part was quite so intricate as Twilight Sparkle in the foreground. The line between her two hind legs was incredibly fragile. I’m genuinely amazed I didn’t accidentally break it or cut it off. 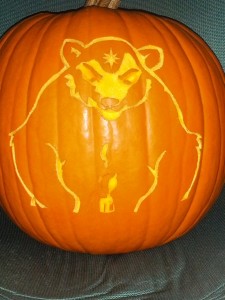 Of course, when I turned off the light to look at my progress, I realized my pumpkin was entirely too thick and no light was coming through. The solution? Carve the inside wall of the pumpkin to make the wall thinner. This wasn’t difficult because I had the right tools. A cheap X-acto knife set that you might buy cheap at an Ocean State Job Lot did the trick nicely. I was a little worried by how much I was scraping off, but it didn’t affect the design which is a sign of just how thick those pumpkin walls were. There was a quite a mass of pumpkin shaving thereafter. 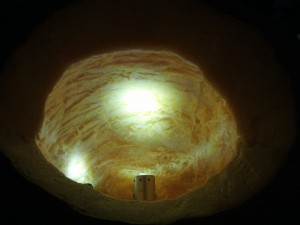 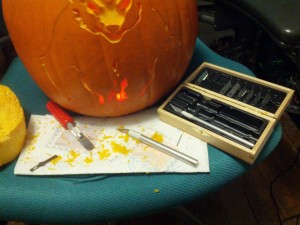 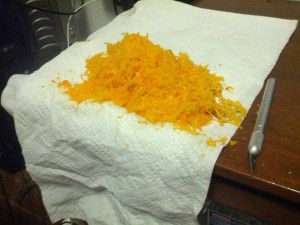 The final product is pretty stunning in person. Unfortunately it doesn’t really translate as well in photo for a number of reasons. The design was a little too wide for the relatively small flashlight I was using as a source of light to illuminate the whole design. The holes I poked in the chest to create the star pattern cannot really be made out in the photo. I also think the inside of the pumpkin may not have been shaved down far enough behind the arms of the Ursa Minor, which contribute to their poor visibility. Here’s a slew of photos from different angles so you can be the judge. 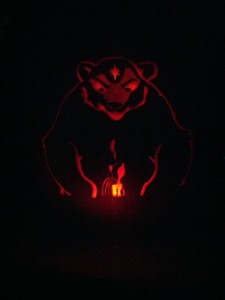 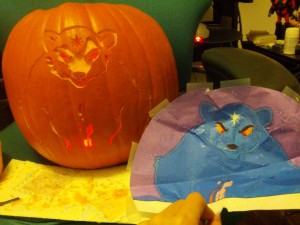 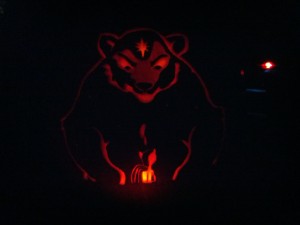 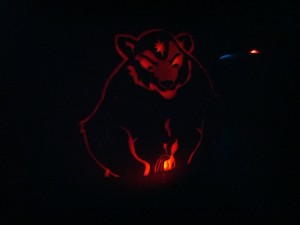 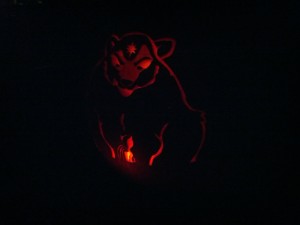 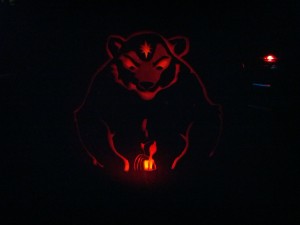 Overall, it was a lot of fun, but after two days of fairly intricate carving I was just too exhausted to keep trying to fix the various issues. Especially when it already looked so amazing as it was. Hope you enjoyed these pictures as much as I enjoyed carving the pumpkin. Feel free to leave a comment! 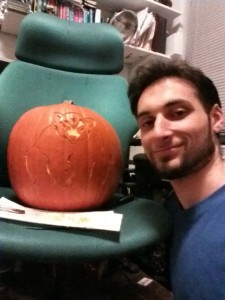 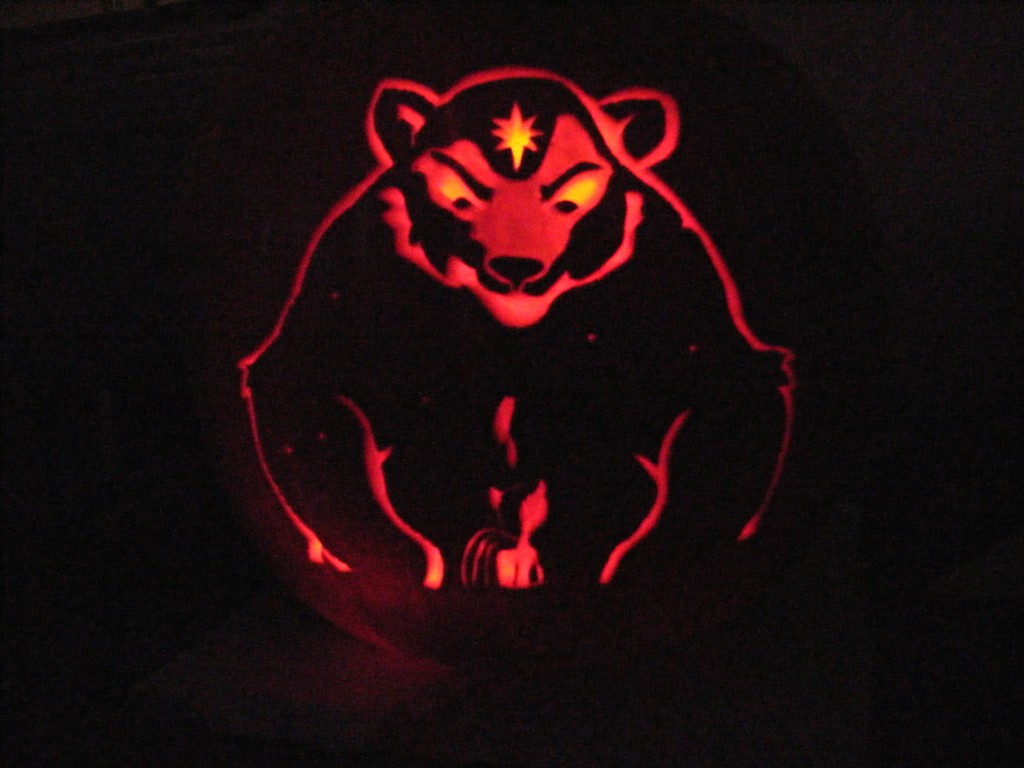 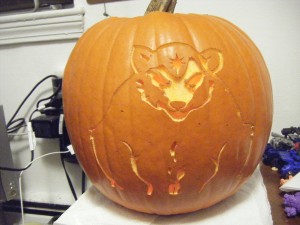 This entry was posted in Fandom, My Little Pony and tagged Friendship is Magic, My Little Pony, pumpkin carving, The Great and Powerful Trixie, Twilight Sparkle, ursa minor. Bookmark the permalink.